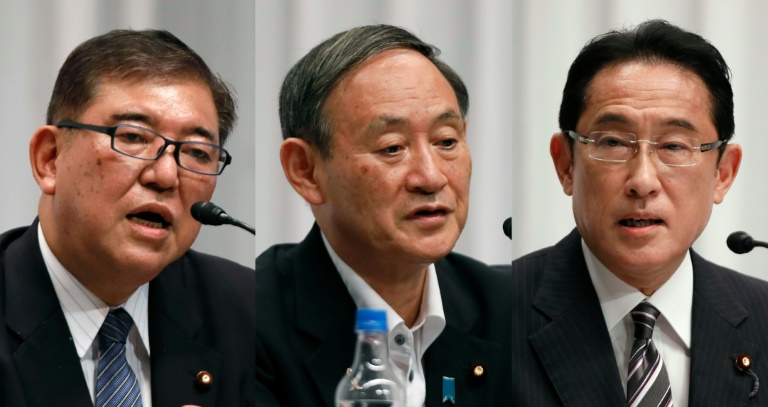 TOKYO: Japan’s ruling party votes Monday for its next leader, with top government adviser Yoshihide Suga all but certain to win and replace Shinzo Abe as the country’s new prime minister.

Chief cabinet secretary Suga is heavily tipped to win the Liberal Democratic Party ballot, with a parliamentary vote Wednesday set to elevate him to the country’s top job.

Even before he formally announced his run, the 71-year-old had won the support of key factions within the ruling party, with his candidacy viewed as promising stability and a continuation of Abe’s policies.

The LDP has chosen to poll only its lawmakers in parliament and three representatives from each of the country’s 47 regions, eschewing a broader ballot including rank-and-file members that officials said would have taken too long to organise.

Ishiba is popular with Japanese voters, but viewed with suspicion by some in his party for having once left its ranks and also challenging Abe’s leadership.

Kishida was formerly viewed as Abe’s favoured successor, but appeared to fall from grace in the months before the prime minister decided to step down.

Abe, who smashed records as Japan’s longest-serving prime minister with more than eight years in power over two terms, has declined to endorse any one candidate.

He made the shock announcement he would step down with a year left in his mandate in late August, saying a recurrence of the ulcerative colitis he has long battled made it impossible for him to stay on.

If Suga succeeds him, analysts say no major policy reversals are on the agenda, and the candidate himself has said his run is intended to ensure a continuation of Abe’s key policies.

The next prime minister will face a raft of complicated challenges.

The country was already in recession before the coronavirus pandemic, and many of the gains of the signature Abenomics economic policy are now in danger.

Suga has said kickstarting the economy will be a top priority, along with containing the virus — essential if the postponed Tokyo 2020 Olympics are to open as planned in July 2021.

There are also diplomatic challenges on the agenda, including protecting the US alliance and navigating ties with China as global opinion hardens against Beijing after the coronavirus and unrest in Hong Kong.

“Now is a difficult time for Japan as the US is putting pressure on China,” said Makoto Iokibe, a professor of political and diplomatic history at University of Hyogo.

“But simply following the path Washington is pursuing and raising tensions with China is not in Japan’s interest,” he told AFP.

One key unknown remains whether Suga will decide to call a snap general election to consolidate his position and avoid being seen as a caretaker facing a new vote in a year — when Abe’s mandate would have ended.

Several senior government officials have mooted the possibility, perhaps as early as October, but Suga has been circumspect so far.

A large part of Japan’s fractious opposition has recently come together in a new bloc, hoping to pose a stronger challenge to a ruling party that has held power for all but a few years in the last six decades.

But the LDP would still be heavily favoured in any new elections, even if Suga’s personal appeal to voters remains an open question.

“Mr Suga is capable of implementing policies by controlling bureaucrats, but his weakness is in winning the heart of the public,” said Iokibe.