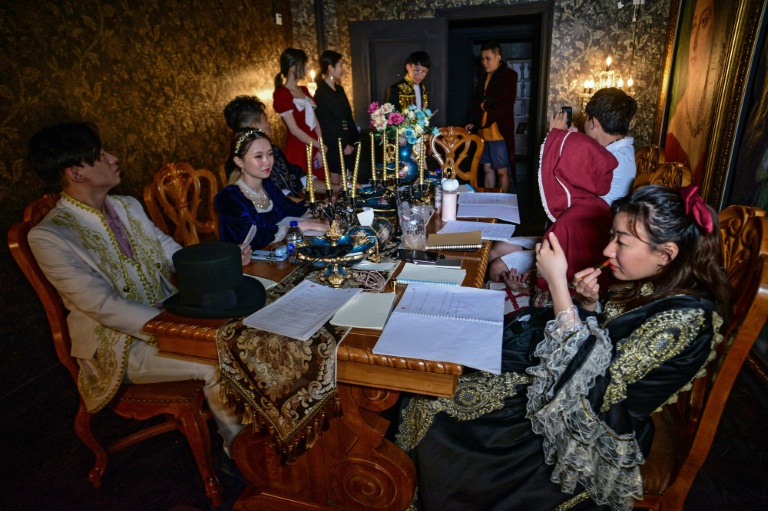 SHANGHAI – A scream echoes from behind a black door, while inside a young woman cowers as she hides from an attacker.

But Zeng Tian is not in real danger — this is an elaborate role-playing game.

The 26-year-old and her seven friends are spending their afternoon locked away in a basement in Shanghai taking part in murder mystery game “The Haunted Mansion”.

“Every time I join a new play and read the script, I get to live a new life,” says Zeng, who is unemployed but hopes to work in the live action role-play (LARP) industry.

“I can spend his or her entire life within four hours and have a taste of their love and hatred,” added Zeng, sporting a frilly hooded cloak that is part European medieval, part Red Riding Hood.

The friends sometimes use their mobile phones to help them with clues but they are mainly reading from scripts and debating who could be the killer on the loose.

Prior to the COVID19 pandemic, the live action murder mystery market appeared to have captured the imagination of China’s urban youths.

The online shopping platform Meituan-Dianping estimated the industry was worth more than 10 billion yuan in 2019 — double the previous year’s figure.

There are no official figures for 2020, but as virus restrictions ease, young people are returning to these fantasy games, experts say.

State media has in recent months run a series of stories about the popularity of role-playing.

China National Radio last month ran a report voicing fears that too many of the scripts rely on murders, violent plots and sexual content, but others see the games as a way to get young people off their smartphones and back interacting with each other in real life.

Xinhua News Agency quoted Yuan Hang, an owner of a LARP game studio in the city of Luoyang, central China’s Henan Province in a report on the trend.

“This type of game, bringing people back to real life from cyberspace, meets the need of young people to have offline social contact and face-to-face communication,” Yuan Hang tells the news outlet.

Zhao Qingsong, who works in e-commerce, agrees: “Nowadays people tend to talk to each other on smartphones. But I feel something is missing during that communication compared to the old days when we could sit together and talk face to face.

The 25-year-old tells AFP: “This gathering really makes me feel no longer lonely.”